A variety of events

Jegenstorf Castle and its spacious park illustrate the splendour of past ages with their elegant interior decorations. Furnishings, handicrafts, clocks, tiled stoves and paintings of the highest quality shed light on Bernese culture and interior design from the 17th to the 19th centuries. The main focus of the castle's exhibition lies on the Baroque splendour of the 18th century. In addition to periodically changing special exhibitions, Jegenstorf Castle hosts a variety of events and bookable offers for young and old: Guided tours, readings, adventure tours, story readings and concerts. Every two years there is an open-air theatre and an open-air cinema in the castle's park, which is open at all times year-round, inviting visitors to take a short stroll or to rest a while.

From fortress to castle

It is said that the old fortress was built in 1111, the very same year that Berchthold II von Zähringen died. Castle and estate belonged to the lords of Jegistorf, vassals to the von Zähringen family. The fortress was most likely built to secure the trade routes between Solothurn and Bern. Originally built in wood, the fortress was reconstructed in stone during the 13th or 14th centuries and a moat was added for additional security. In 1720, Albrecht Friedrich von Erlach (1696-1788) had the building remodelled into an elegant Baroque country manor. The medieval keep still stands at the heart of the modern castle complex. While the castle architecture has remained largely unchanged since this last large-scale remodelling, the interior was refurbished between 1913 and 1915 at the behest of the castle's last private owner. Arthur von Stürler (1874-1934) lost his fortune not long after the renovations: Having invested large sums in Russia’s agriculture he was dispossessed during the Russian Revolution in 1917. After his death the castle was auctioned off.

In 1936 the estate was bought up by the Jegenstorf Castle Conservation Society and was slowly turned into a museum. By 1955 the society had evolved into a foundation with the aim of ensuring that the castle and park are preserved in accordance with modern principles of cultural heritage preservation and are kept in good repair. The foundation also ensures that the buildings remain open to the public.
The unique museum with its splendid furnishings still reflects much of the fabulous lifestyle of its former residents: High-quality artefacts from bourgeois and patrician homes in the old republic and city of Bern as well as choice furnishings and pieces of art illustrate Bernese lifestyle and culture from the 17th to the 19th centuries. The main focus of the castle's exhibition lies on the Baroque splendour of the 18th century. The collection’s highlights include over a dozen painted tiled stoves from many different areas in Switzerland, a substantial collection of portraits as well as furnishings produced by the Bernese cabinetmakers Funk, Hopfengärtner and Aebersold.

From October 1944 until the end of the active service, Jegenstorf Castle served as command post to General Henri Guisan. In addition to his study on the first floor, he occupied a private bedroom in the castle - according to legend he slept on a camp bed. In November 1954 the castle briefly served as an imperial residence: During a state visit to Switzerland, emperor Haile Selassie of Ethiopia stayed at the castle for four days. For this occasion the confederacy had a bathroom built into the two metre thick castle walls!

A castle park with flora and fauna

The expansive and cosy park is not only ideal for a relaxing stroll but also serves as a spectacular backdrop for events. Highlights are the water fountains with trout, the large carp pond complete with nymph and grotto, the ProSpecieRara apple plantation, the peony gardens and the largest and oldest plantain trees in the Canton of Bern. An insider's tip is the home-made sparkling apple wine enjoyed in the castle's café located in the old washhouse.

Castle grounds are freely accessible 7 days a week/24 hours a day. Picnics are allowed in the castle grounds

Extensive walks in the grounds around the castle. Park with historical apple trees (ProSpeciaRara), peony garden, carp pond, fountain with trout, and historical buildings such as an orangery, a bathhouse and a washhouse.

Castle café: Tea, coffee, pastries and refreshments are served at the historical washhouse.
Opening hours, Tuesday to Sunday: 14 to 17

In the castle grounds: Castle café at the historical washhouse, Tuesday to Sunday: 14 to 17. Range of refreshments, snacks, pastries, coffee and tea. Speciality: "Schloss Jegenstorf" sparkling apple wine made of various kinds of apple from the historical arboretum (ProSpecieRara).

In the castle: "Schloss Jegenstorf" sparkling apple wine made of various kinds of apple from the historical arboretum (ProSpecieRara). CHF 7 per glass, CHF 10 per person including snack

Gasthof Löwen, Löwenplatz 1, Jegenstorf, 031 761 02 02. Closed Mondays and Tuesdays (except for groups with a pre-arranged appointment).

The castle is immediately adjacent to the stop "Jegenstorf".

From Basel/Zurich: A1 to the Kirchberg exit, carry on towards Bern as far as Hindelbank, then turn off to Jegenstorf

From Bern: A1 to the Schönbühl exit, then carry on towards Solothurn as far as Jegenstorf. 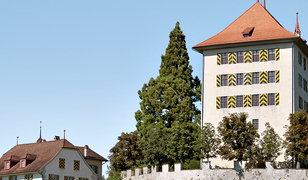 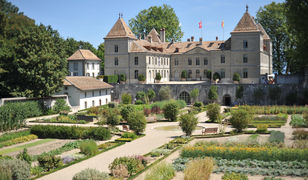