The architectural assemblage combines two museums – one at the castle and the other in the town – which recount the 800-year history of the lords and their subjects. Since its refurbishment, which was completed in 2015, Werdenberg Castle is restored to its former glory.

Town and castle – an ensemble

Mentioned for the first time in 1289, the small town of Werdenberg has continuously been inhabited for the past 800 years. Its history is closely linked to the construction of the eponymous castle. Unlike most medieval towns, where a group of existing houses were at some stage surrounded by a protective wall, the dwellings at Werdenberg were constructed within the already existing castle wall.

The two museums, one at the castle, the other in the town, recount the history of the lords and their subjects. Of the three storeys in the castle each one is dedicated to one of the three relevant eras – the period of the lords, of the Glarus bailiffs and of the Hilty family.

The Schlangenhaus Museum in the town shows how people used to live in the region around Werdenberg. Here, the connection is made between the past and the present, from the earliest traces of settlement right up to the emerging interest in this unique medieval timber-built settlement in the 1960s to its inclusion in the Inventory of Swiss Heritage Sites as a townscape worthy of protection and a site of national importance. Striking introductory displays and shadow plays outline the cultural and architectural history of the town, whilst audio plays weave a web of vivid stories encompassing both museums.

The various builders all left their personal architectural marks on Werdenberg Castle, in the shape of the crenellation, the keep and Luzinen, the great hall, the outer ward and courtyard, or the roof truss and vaults. Built by the Lords of Montfort in the 13th century as a fortress securing the crossing into the Toggenburg area, it was turned into a chateau in the 16th century by the Glarus bailiffs. Having served as a bourgeois residence in the Romantic period, the local Hilty family – a well-known member of which was the constitutional lawyer and lay theologian Carl Hilty – bought Werdenberg Castle in 1835. Finally, its last inhabitant Frieda Hilty, donated it to the Canton of St. Gall in 1956, which installed a museum dedicated to the River Rhine and a weapons collection in 1981/82. Today the imposing building itself is the main attraction and, as a museum, represents all epochs of its 800-year long social history.

Homemade cakes and snacks made in the region are available in the new bistro, a structure in the castle courtyard built entirely of wood. The pavilion-like new building was constructed as part of a fundamental restoration campaign, which was completed in 2015.

Guided tours of the museums and of the town of Werdenberg as well as regional exhibitions and events for children and families are on offer during the season from 1st April to 31st October.

Since 2012, the Schlossmediale, a ten-day festival of early music, modern music and audio-visual art, has taken place every Pentecost and has presented new artistic views of the castle. The programme includes concerts, performances, sound installations, workshops and a special exhibition on the theme chosen for that particular year.

The bistro in the castle courtyard is open on Fridays until 8 pm.

Reductions (valid only with an identifiction card)

Free Entry (valid only with an identifiction card)

Dogs must wait in the castle courtyard.

In contrast to the 800 years old castle with its many stairs, the courtyard is freely accessible and both the bistro and toilet facilities are accessible to the disabled.

The Egeten BBQ area is close to Werdenberg Castle and offers an idyllic setting for picnics. There is also a leisure centre with miniature golf, a trampoline and other facilities on Lake Werdenberg.

The bistro in the historical setting of the castle courtyard offers homemade cakes and snacks produced in the region and allows you to simply enjoy your time at Werdenberg Castle. Wherever possible, organic or Demeter-certified produce from the region is used and everything is homemade with attention to detail. All the information on the Werdenberg museums as well as tickets and audio-play sets are available at the bistro.

The bistro can also be booked for a special drinks reception, a business meal or a birthday party.

Cycle the embankment along the Rhine as far as Werdenberg or hike from castle to castle between Sargans and Werdenberg (c. 4.5 hours).

From Zurich main station / St. Gallen as far as Buchs SG. Travel time ZH-Buchs approx. 75 mins. Direct trains from St. Gallen to Buchs SG. At the station in Buchs take the Gams/Wildhaus/Nesslau bus as far as the second stop (Werdenberg).

From Zurich via the A3 motorway to Chur. After Sargans, take the A13 motorway to St.Margrethen/St.Gallen as far as the exit Buchs/Schaan FL. Follow the signposts towards Grabs as far as Werdenberg Castle.

From St. Gallen via the A1 motorway to St. Margrethen/Kreuzlingen. Continue on the A13 as far as the exit Buchs/ Schaan FL. Follow the signposts towards Grabs as far as Werdenberg Castle.

There is ample free parking on Marktplatz square in Buchs (on the lake). It is a 5-minute walk to Werdenberg town, and 10 to 15 minutes to the castle. The parking spaces just on the entrance into the town (beside the Rössli restaurant) are metered.

The Rhine Valley and the mountainous region around Werdenberg Castle invite visitors to undertake beautiful hikes and bicycle tours. The Schluchtenweg Sevelen, the Klangwelt Toggenburg and the Alpstein Massif are all easily accessible from here.

You will have the best views of Werdenberg Castle and the town if you walk around Lake Werdenberg.

A special hiking tour is the Sargans-Werdenberg castle route: it takes 4.5 hours to walk 22 km along an elevated route from one castle to the other.

The Hoher Kasten mountain offers a breath-taking view across the whole Rhine Valley.

The Volg Sinnespfad runs right past the castle.

The Greifvogelpark Buchs is close by.

At the Gonzen iron mines you can take a trip to the interior of the mountain. 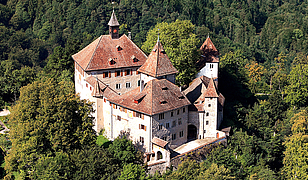 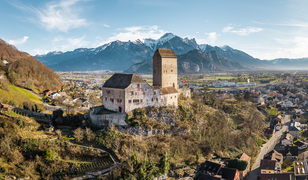