Towering 150 metres above the River Töss, Kyburg Castle boasts a splendid 270-degree view of the surrounding area from the Seerücken hills to the Hegau Volcanoes, the Feldberg, the Jura mountains and Alpine ridges to Glärnisch Mountain. Kyburg Castle is the best-preserved feudal keep in north-eastern Switzerland. It served as a powerful symbol of its owners’ might: the Counts of Kyburg, the Habsburg Kings and Dukes as well as the city of Zurich.

Nestled in the forests between Zurich and Winterthur, Kyburg Castle offers a splendid view of the former territories of the Lords of Kyburg. Its thick walls still serve as impressive reminders of its former owners’ might and power.

A castle for all the senses

In the new exhibition, visitors can experience anew the almost 1000-year history of the Kyburg rulers and the multi-layered architecture of the monument. Dozens of suits of armour and helmets as well as hundreds of halbards can be admired in the richly filled armoury. The audio guide "Kyburg in the Ear" is available in German, English, French and Italian for individual tours of the exhibition.
The baroque castle garden also offers an experience for all the senses. Cabbages, medicinal herbs, legumes and flowering shrubs grow on the levelled rampart between the two moats as they once did. The reopened circular wall path around Kyburg Castle is also worth a walk; here you can enjoy a sublime view into the distance.

A symbol of power built in stone

By marrying Adelheid von Winterthur in 1070 Duke Hartman von Dillingen laid the building blocks for the rise of the Kyburg Dynasty, whose centre of power was Kyburg Castle. Whilst nothing remains of the original fortress, which was destroyed in 1079, Duke Ulrich III von Kyburg, one of the most important nobles in south-western Germany ordered the construction of the modern castle complex in around 1200, complete with a tower, palas, curtain wall and a chapel. During his time the Kyburg family’s territories stretched from Lake Constance all the way to Fribourg.

When in 1264, with no male heirs to inherit the castle, the entire Kyburg estates passed to the Habsburg family, this newly acquired wealth and power played an important role in Rudolf von Habsburg’s rise to power. He was elected German King and his son decided to store the Imperial Regalia at Kyburg Castle. Duke Leopold III added a great hall to the castle complex to further emphasize the castle's importance.

In 1424 the city of Zurich acquired the castle and its territories, doubling its own domain. From then on Kyburg Castle was home to bailiffs from Zurich, who had the former fortress turned into a castle residence and seat of administration.

After the Helvetic Revolution Kyburg Castle initially continued to serve as the administrative district headquarters, but was eventually acquired by a private individual in 1831. In 1865 Matthäus Pfau first opened it to the public and personally offered guided tours through Switzerland’s first castle museum.

Bench seats and a play area with life-size wooden animals are located under the lime trees in front of the castle garden.

Eating and smoking are permitted in the castle garden and inner courtyard.

Drinks and snacks can be obtained from the self-service café.

The chapel, the castle rooms on the ground floor, the café and the disabled lavatory next to the ticket desk are wheelchair-accessible.

Rucksacks and large bags must be deposited at the ticket desk.

Dogs may be taken into the inner courtyard provided they are on a leash.

By train to Effretikon, then by bus 655 to the bus station "Kyburg, Gemeindehaus" and a 3 minutes walk to the castle.

Parking lots at the village entrance. 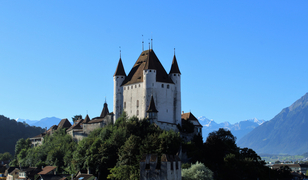